A. Gusev who runs a website called SpamIt.com is also one of Russia’s most heinous spam-enabling kingpins.

After Russian authorities started cracking down on his operation, the volume of emails sent around the world dropped by one-fifth. SpamIt.com (which currently features little more than the words, “The King is dead! Long live the King!” — a proclamation made during the ascension of a new monarch) is what Gusev uses as a portal to keep his spam empire going, contracting out folks who don’t mind spending all day sending the rest of the world emails about cheap viagra (Whatever will we do now?) It was initially unknown why SpamIt.com stopped operating toward the end of September, though Russian authorities have come forward and said that they’re charging Gusev with “operating a pharmacy without a license and of failing to register a business,” according to  The New York Times.

That doesn’t sound all that harsh, though I guess you can’t convict someone for just generally annoying the entire population of the planet. Sounds like a crime against humanity to us if there ever was one. The move by Russian police is considered to be an odd one, as spammers and spam ringleaders such as Gusev generally operate with free reign — and are even believed to be contracted by Russia’s intelligence agencies from time to time for their cyber warfare expertise and access to computers jeopardised by malicious spam software. As for Gusev, it’s thought that he’s since fled the country.

Without his website paying spammers to advertise for pharmaceutical companies, we’ve only got to put up with 200 billion spam messages. 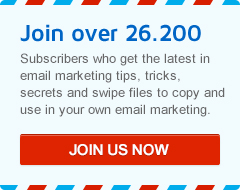 Create sales from leads that didn’t buy the first time around. Make contact or call on

get started for freeview pricing plans
Easy to use Australian email and SMS marketing service helps ambitious businesses with proven email and SMS doubling sales with every send.